After our two bestsellers “Best Legjob between the long Legs of Secretary Alina” and “Legjob Queen Alina milks him twice between her Thighs” we have been asked many times to make another legjob. Now here we are, and we think we have created again something very special and new.

Mistress Alina has oiled her legs. She is wearing a very short dress, which allows some hot views of her sexy bottom, gorgeous high heel sandals and she has painted her toes in red. Her slave is standing on the wall with his legs spread. He is so small compared to his Mistress. Her legs almost reach until his breast.

Alina only needs to lift her leg a little bit to tease his vulnerable parts with her knee. But then she rubs his manhood hard and fast with her knees, shanks and thighs. She pours lots of oil on his cock to lubricate everything and then she continues rubbing her leg allover his cock and balls.

The Goddess squeezes his dick between her thighs and fucks him hard. Soon he is on the edge to shoot out his load, but Alina has him under control.

More oil – much more. More fucking between her thighs and more rubbing of her endless legs against his cock and balls. “Watsch” She knees him in the nuts, but he takes it thankfully. Faster and faster – harder and harder she rubs him and she looks so seductively into the camera while she makes her slave totally crazy.

After Alina has rubbed the last drop out of her slave, she releases his dick and shows her oily and cummy legs into the camera. 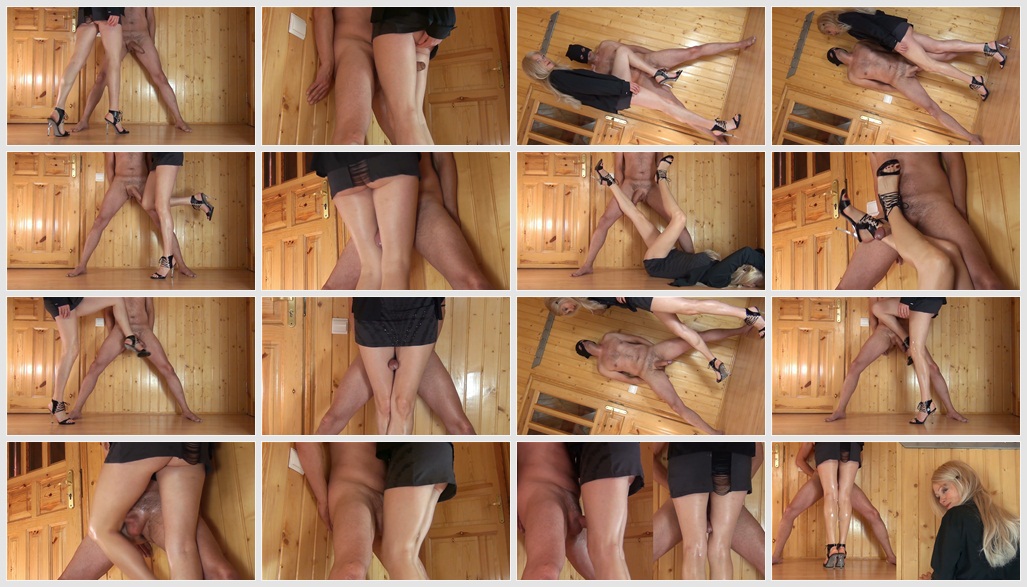