While on the road, an evening before the girls are going out to celebrate their forth straight win. Coach tries to have a word with Maria on topic of a fellow player not following the playbook and being a ball hawg. He figured it would be best to talk to the star forward so she could relay it to her. Maria is hardly concerned and feels coach is way too stressed out. Coach emphasizes that she’s not following the playbook. Maria, bratty, looking saucy as f*ck, snatches the playbook out of his hand, doodles in it and throws it on the ground in front of his face “Fuck the Playbook!” Kicking a leg up on the desk. “Get down!” “You know what you’ve been so stressed out about her being a bad player when I think she’s a valuable team player! Do you want to be a valuable team player too? You’re supposed to be the f*cking Coach!” Kicking her leg back up on the desk and pointing him to where he needs to be. Coach goes down with direction. Muff dives right in on her prime pantyhose pussy…Dirty Ol Coach! Maria’s firm soccer legs vice gripping his head as she pleasures herself on his face. Coach caught a rock hard bone and is now rubbing up on her hot red velvety shoe. Gets to pumping on her shoe and soon teased by one pantyhose sole silkily sliding on his schlong. Standing up in a moment of pure sexual intimacy, coach’s lap dragon is lunging. She askes him to help take her top off. As he begins to pull up, she leans forward over the desk having his thumper land right between her thighs against her wet hot spot. Coach’s pervert level maxes out and just starts thigh fucking vigorously. The pantyhose tickles so good! She’s got such tight calf and arch grips just working Coach. And all those foot motions! The time comes when her beautiful bare soles are in his face and he’s being told to cum on them. Coach goes into a warp speed jacking frenzy and busts his cum all over them! 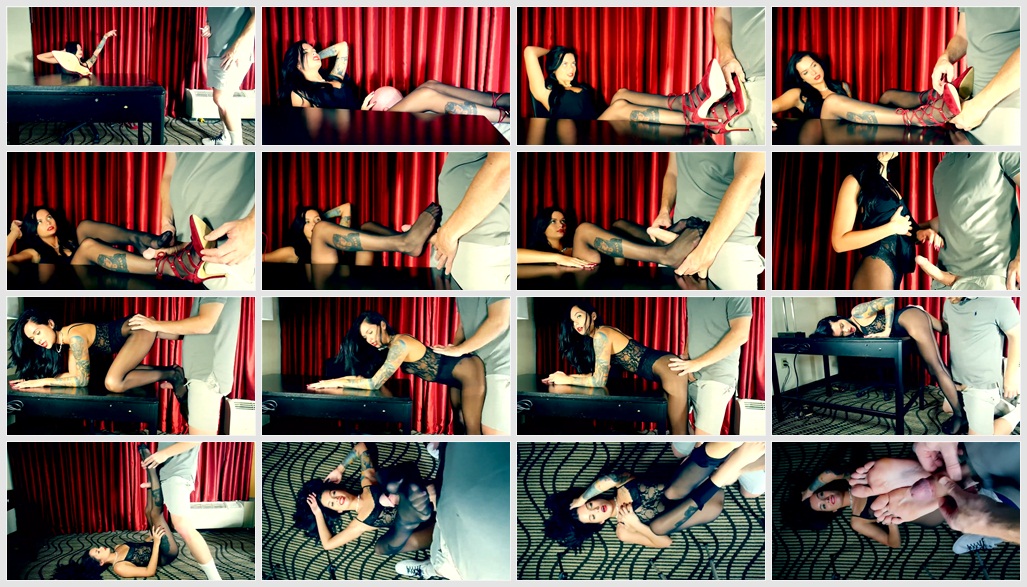